At the heart of every arcade machine is the games unit or PCB. This will dictate what features the machine has and what games it is capable of playing.
Since 2007, we’ve been using the Games Family system which features over 1000 games.
Now in 2013 we’ve released our Ultra Edition system which we’re confident will surpass all others.

Why the Ultra Edition?

We’ve tinkered with the games family unit for many years now. Adding new features and more games. This was known as the Phase 2 and Phase 3 upgrades.

Overseas developers start upgrading as well. But the upgrades are always the same. More games… Some good games, a lot of bad games, and even games that had nude or explicit graphics. Many times over they were installing the same game but just under a different title!

We decided to separate ourselves from the rest of the sheep and travel down a different road.
A road of customising our own system which is able to capture an entire ‘History of Gaming’

What this means for you?

Over the years we’ve had so many enquiries. To list some of the more common ones:

For our Ultra Edition machines, no problems!

For us this industry is about reconnecting with your inner child. I’m sure we can all confidently agree that Pacman doesn’t have the most advanced graphics. But when you play it, it really takes you back to when you were young.

So maybe when you were younger you had a Nintendo, or a Sega Master System. For me it all started with the Atari 2600. Well for the Ultra Edition we’ve got that covered too.

On the one machine you can play:

Thousands of games of all different platforms and consoles; all on the one machine. Now you see why we’re claiming an entire History of Gaming!

Pinball too? Say what?!

Pinball machines are a important part of gaming history. We felt that we couldn’t claim the history of gaming title without including pinballs too.

We’ve included digital replicas of the original and genuine pinball machines that are widely loved.
With features, multiballs, goals and targets this is the closest experience you’ll get to the real thing (in a digital way of course).

Plus so many more!

How? Think of a car. An old car, something like a 1982 Volvo 240. If you bought one back in 1982 it would have been the bees knees!
Now skip 30 years ahead and think about all the advancements in automobile engineering.
Sure, you could have upgraded your Volvo along the way. Added a Mp3 player, added bluetooth, new brakes, new wheels, upgraded the engine, the list goes on and on. At the end of the day you’ve still got a 1982 Volvo 240. This is what the Games Family system, and all the other systems from overseas is like.

Our Ultra Edition system is like buying a new car today. It’s made from current parts, current technology & current software.
All parts are sourced locally and built locally.

These are 2 of our most popular machines both offering great performance but catering for slightly different markets.

Firstly to explain this please refer to the following image.  This layout of gaming is ideal for classic turn based games like Pacman, Space Invaders, etc.
It does not suit later games like Street Fighter, Metal Slug, etc due to the fact that one player will be playing upside down. 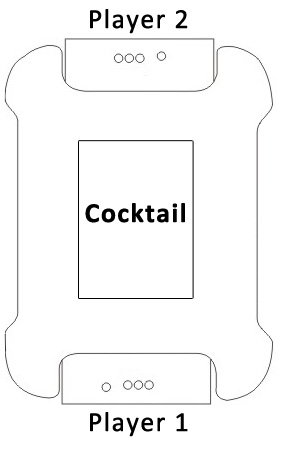 To get around this limitation we can modify the cabinet to allow for side by side controllers.  Thus allowing for 2 player simultaneous game play.
This design is ideal for later games as nobody is missing out as the 2 controls are next to each other.
Since these games are horizontally based we’ve also been able to increase the monitor size to 26″. 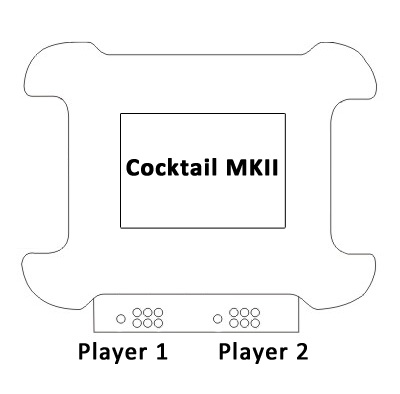 The downside to the MKII design is that it veers away from traditional cocktail gaming of sitting across your friend.
For some this is very important because it reminds them of their days of playing these games.  Being a nostalgic product we believe in keeping things as close to real deal as possible.
Thus, the Cocktail Pro combines both layouts into one.  By doing this we take the Cocktail Pro back down to the original monitor size of 19″ 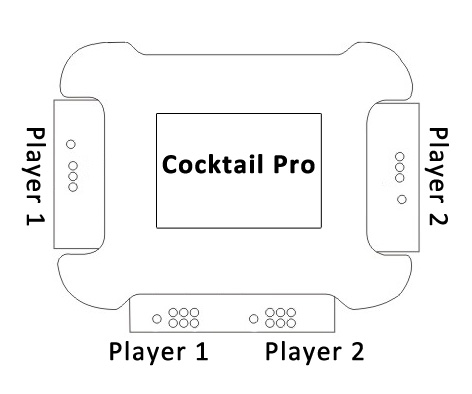 You may have noticed in the Cocktail Pro section that we take the monitor size back down to 19″
The reason for this is that monitors larger than 19″ are always in a different aspect ratio.  Classic cocktail games function best in a 4:3 ratio so if we installed a 26″ monitor then the image will become stretched and out of proportion.  This monitor size is unsuitable for early classic arcade games so is not recommended.
Have a look at the below photo to see what happens. 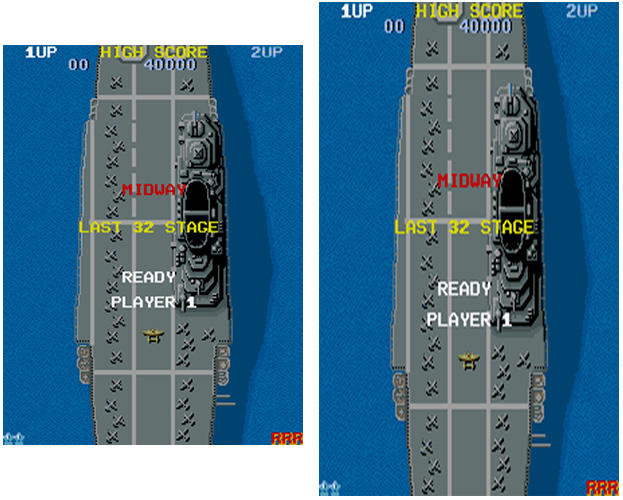 Overall both are great machines with none better or worse than the other.  It really depends on what suits you and your needs.

Of course if you have any questions please don’t hesitate to email us for assistance.